Should You Do a Disc Brake Conversion for Classic Vehicles?

Should You Do a Disc Brake Conversion for Classic Vehicles?

While many of us long for the good old days of automobiles and love our classics – the style, the mechanics, and the vibe – it’s too easy to forget that many of today’s modern automotive technological advancements have improved vehicles for the better.

Cars today are safer, more comfortable, and more efficient. So while you may want to pursue absolute purity of the time period for your classic car restoration project, it’s essential to weigh the pros and the cons. (You may even have no choice as some systems for your vehicle may be impossible to achieve because of a lack of parts.)

The History of Disc Brakes

Brakes are one of those features that have changed for the better. While disc brakes were first patented in 1902 by British engineer Frederick W. Lanchester (though they were reportedly invented by Elmer Ambrose Sperry, an American inventor, and entrepreneur, in 1889), it was not until the 1950s that they came into mass production. The Citroën DS, introduced in 1955, was the first sustained mass production use of modern automotive disc brakes. The vehicle debuted many innovations; one of them was caliper-type front disc brakes mounted inboard near the transmission and powered by the vehicle’s central hydraulic system. 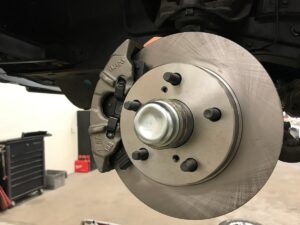 Nevertheless, rear drum brakes persisted in the twenty-first century, primarily in base model budget vehicles. Today, however, four-wheel disc brake-equipped vehicles are standard even among the most basic cars. They offer better braking performance and fewer moving parts. Their relative simplicity makes them more efficient to manufacture on the assembly line. They’re also easier to service than drum brakes. They are less susceptible to contamination, brake fade, and thermal breakdown of the shoes, springs, and other parts, mostly because they have a more “open” design to dissipate heat.

Today, many classic car aficionados are choosing to replace older drum brakes with modern disc brakes. The goal for most is to improve the vehicle’s safety profile.

Innovative Restorations is an automotive service facility that is dedicated to delivering quality, reliable service. We are experienced in repairing and maintaining all aspects of modern and classic vehicles, including mechanical upgrades like brake conversions for all vehicles. Call us at 860-852-3275 to discuss your vehicle service needs.